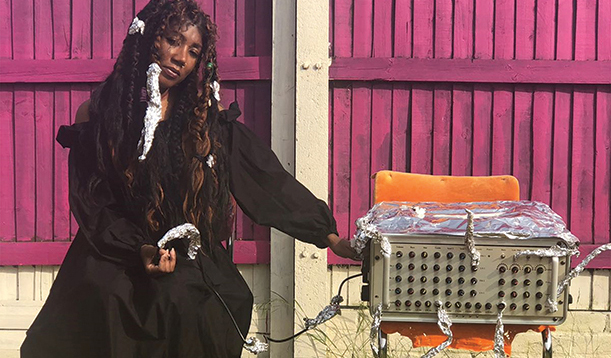 Thali Lotus is the founder of CAYA, a 21st century soundsystem mining a rich cultural seam which counts the legendary Channel One and Coxsone Sound among its forebears. Through events, community outreach and workshops, she’s breathing new life into the scene and helping spark a resurgence across the UK. Thali gave us the story behind CAYA.

"This picture of me and my pre-amp, called Spirit, was taken in my back garden. As the device that pumps sound into the PA, the pre-amp is central to most people’s idea of the soundsystem. But for me it goes further; the connection I have to it is musical and also spiritual.

The tinfoil represents this – it’s showing the electrons passing through me to the pre-amp and the connectivity I feel to my soundsystem. I don’t just get 13 amps of electronic power from it when I plug in, it’s so much more than that.

CAYA was born in November 2016. I’d researched soundsystems for a year prior, visiting the elders who’d had them for decades to get a sense of what I wanted to do. I based the design on a few soundsystems I’d seen and liked, but I also wanted to put a modern spin on my approach. I initially used a crossover unit and EQ instead of a pre-amp, and then I had a Tubbys pre-amp, but it was old and complex, and I didn’t really click with it. So, I had Spirit custom-built for me, and the connection is really there.

My dad had a soundsystem when I was growing up in the eighties and it was a big part of my childhood. Back then, he predominantly played rare groove and Lovers Rock. His soundsystem was feeding community demand for shabeens and creating a space for people to congregate, being first generation migrants.

Soundsystem culture has changed a lot since then – it’s become a more accepted way of life. It’s now embraced not just by black communities but by multicultural communities all over Britain. Leicester, London, Bristol, Birmingham: it’s definitely enjoying a resurgence. But my mission with CAYA is to take it to another level. I see myself as a sound artist, rather than just a sound operator. I want to build a platform to share the message and inspire other women.

We’ve still got a long way to go in terms of equality as it’s such a male-dominated environment. I know it’s a continual challenge but I’m positive we’re making change. Across society, women have to be exceptional at what they do, otherwise they’re not even considered. I know this, and that’s why I’m focused on other aspects of CAYA too – I don’t want to get caught up in proving a point. The artistic and academic sides of my work help sum up the experience too.

Having said that, I do feel part of an open and connected heritage – this music is very much part of me. I suppose it’s like an old heirloom to a British family, which has been passed down through the generations. There are always going to be advancements and differences, but my take on it is a bit more out-there! My sound is message music - I concentrate on roots and dub. I feel dub is the language of the cosmos, and the soundsystem is our way of transcending into that space. It’s a doorway into that universal experience, and a sacred space for a lot of people."

Find out more at comeasuare.com