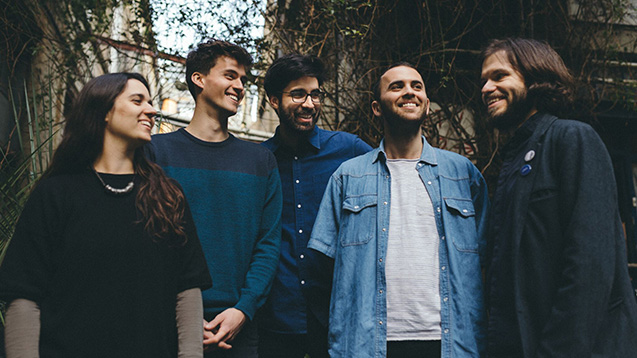 The contemporary jazz outfit reveal how Jewish folklore became entangled in their sound...

The latter element was an unintentional addition to their sonics, after guitarist Tal Janes and pianist Joseph Costi unearthed a sound world of Jewish folk melodies buried in their consciousness.

'Joseph started playing fragments of a melody which sounded incredibly familiar. I didn't know what it was or why I knew it, but I did. We both managed to figure out the song by ear and that was the first time we both realised we had Jewish folk songs hidden somewhere in our sub-conscious,' says Tal.

Formed by the pair while studying together in London, Bahla is a product of their exploration into the history of the Jewish folklore genre; from North-African rhythms and ceremonial melodies to Russian yiddish art songs.

Now, with debut album Imprints out in the world, the band's ground-breaking innovation has been fully realised, with eight songs telling stories of identity, migration and displacement.

We caught up with Tal and Joseph to learn more...

How did you all come together to form Bahla?

Myself and Joseph met whilst studying jazz at Middlesex University. As we were packing up from a rehearsal, Joseph started playing fragments of a melody which sounded incredibly familiar. I didn't know what it was or why I knew it, but I did. We both managed to figure out the song by ear and that was the first time we both realised we had Jewish folk songs hidden somewhere in our sub-conscious.

My mum had a book full of songs so we met up regularly and began to learn the ones we vaguely knew and then started searching for more. It was oddly nostalgic but new at the same time. Unintentionally we both began composing music, trying to capture the sound of the songs we had been learning. Once we had three tunes together, we started to think about finding a rhythm section to join us to try out the songs.

Your music is notoriously hard to pigeonhole – how would you describe it?

We've settled on describing it as 'cinematic jazz entangled with Jewish folklore' but that came after we made the music. The hard thing is to steer people away from preconceptions. At first, a few people who came to our shows told us they were half-expecting to see a klezmer band, so we knew we had some work to do on finding a better way to describe it.

Where does your love of jazz come from?

I got into jazz when I was around 20 years old. The first jazz gig I went to see was the Femi Temowo trio and was blown away by the interaction, energy and dynamics. It was like they were speaking their own language, and I wanted in. It's been a growing love: the more I studied and listened, the more I liked it.

Now it's about freedom, breaking down the barriers between genres and trying to be transparent about who you are and how you feel. I love John Coltrane and Jim Hall but I'm also into Jimi Hendrix, John Martyn and J-Dilla. I think everyone in Bahla has a huge respect for the tradition of jazz but have many other influences and are searching for a coherent and honest way to make music with all of them.

How about the Jewish folk influence?

For myself and Joseph, it was part of our childhood and it's come out more as we've been developing as musicians. Joseph who grew up in Venezuela had weekly classes where they would learn Jewish songs, and for me it was mainly in the background at home. Although most of the research has been between us two, we've shared a lot of music and concepts with the rest of the band.

We spent a lot of time trying to figure how all the different types of Jewish folk were tied together, whether it's music from Morroco, Yemen or Russia, they all had some kind of common sound. We found an album called Masters of the Jewish Art Song by Russian Cantor and Louis Danto. It's so beautiful. It really captures a lot of what we love about Jewish folk music. The dynamics, the phrasing, the storytelling element, the type of harmony, the shape of the music. Yiddish art songs are basically classical re-works of old yiddish folk songs, so it was interesting to see how the music transformed in their hands.

Would you say your music has a concept behind it?

Yes. I think we are part of a generation that has the potential to have a broad set of influences, which I think is beautiful and needs to be embraced. Bahla has so far been about connecting with our Jewish identity, in a non-religious way and seeing how that fits into who are are now.

What’s the thinking behind your debut LP Imprints?

We had the chance to play at the London Jazz Festival in November 2016 and wanted to do something special for it. We'd done a lot of research by that point and realised the expulsion of the Jews from Spain in 1492 had a huge impact on history and the geography of the people and music. It was interesting to see how they did or didn't integrate into their new surroundings and inevitably, how the music reflected that. We found various ways to make music from it but we really immersed ourselves in books, documentaries, music and articles until we were able to start writing.

How was it inspired by national and international events?

Although we started by focusing on the 15th century, we couldn't help but be influenced by what’s happened, and is still happening all over the world. I was watching a documentary about the crisis in Syria and started to write a poem which ended up being the lyrics for the title track of the album Imprints.

I tried to get inside what it might feel like to have to leave your home and everything you know. And of course, what’s happening here in the UK. Part of what we're doing is trying to show that different cultures coming together is essentially a good thing, which we need to accept and embrace.

You performed at the BBC Proms in 2015 – what was that like?

It was only our second gig and Ben, our drummer, unfortunately got stuck in Beirut but we were lucky to have Corrie Dick step in and save the day at the last minute. It was really great to play to a full and engaged audience. I feel like it put us on the right foot for taking the band seriously. Our music has come a long way since then and we would love to do it again at some point.

What can we expect from your upcoming tour?

We're all excited to be playing back to back shows. It really gives you a chance to get deeper into the music and to search for new ways to play the same material.

We'll be releasing a narrative style music video we made for Imprints which we're really excited about. We have a 7" single with Gearbox Records coming out. More gigs. We've been getting quite obsessed with Radiohead recently and would love to do a night where we do our take on some of their music but it's just a thought at the moment.

We've started composing again which feels so good after spending so much time in front of a computer this year! Also, we have a section on our website called 'Potchka' where we keep a blog of our research, we haven't had time for it this year so it will be nice to get back to doing that regularly next year.

Imprints is out now.