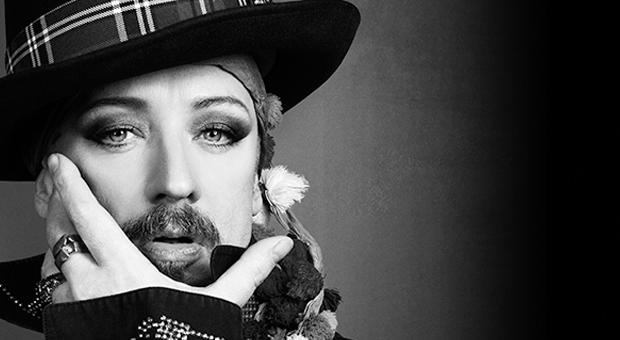 From luxury to heartache and back again: meet the iconic pop star who's put his demons away and embraced music…

George O’Dowd, the self-proclaimed ‘pink sheep’ of his working class family, is in the States embarking on the next stage of what has been a dazzlingly colourful, chaotic career.

He sashayed into mainstream music lovers’ lives back in the early eighties as Culture Club frontman, performing on Top of the Pops and dowsing the national conscious in sexual confusion. A bouquet of hits including Karma Chameleon and Do You Want To Hurt Me? continued the seduction, glamourising the charts with a flirty cocktail of eye-linered androgyny and white boy soul.

The dramatic rise of Boy George and his band as well as their fall are the stuff of tabloid legend - the secret relationship with Culture Club drummer Jon Moss, the spiral into drugs, even George’s sentencing to sweep the streets of New York for possession are well documented.

But fast forward to 2015, and life and music are looking positive and pretty grown up for George. Now 53, he was recipient of the PRS for Music Outstanding Contribution to British Music Award at this year’s Ivor Novello Awards, is prepping a new solo album and is recording a new Culture Club album. His 2013 hit King of Everything asks ‘…will I be King again?’ On this run of form it’s quite possible.

‘I feel like I’m going through a really fertile period as a songwriter,’ he professes when probed about winning The Ivor. ‘This award is great as I love writing, I love the process of coming up with an idea and seeing a song happen in front of you. But to be honest, a lot of my best songwriting has gone unnoticed, except by those who follow me ardently.’

George is currently in America looking to work out a deal for a reality TV show in what he says will be a similar format to Keeping up with the Kardashians. Potential titles? ‘Bend it like Boy George’ obviously. Or ‘The Carcrashians’. But for him, TV is a way of connecting with new audiences to promote his music.

‘It’s about building a new platform,’ he explains. ‘For an artist like me, there isn’t any airplay. The normal channels you previously relied on don’t exist. It’s a very interesting moment in pop culture. Everyone’s a bit confused and from a creative point that’s really exciting. Rather than moaning about it I’m exploring other avenues, which is where the ingenuity comes into it. And in America, TV isn’t so much of a dirty word.’ 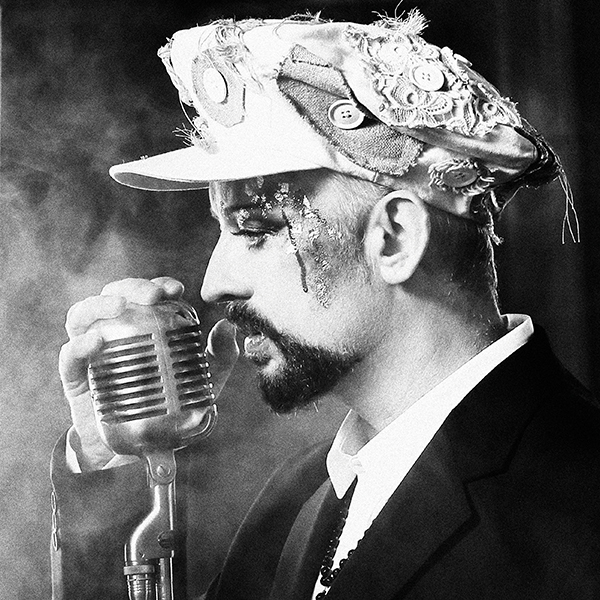 When Boy George first fell in love with music, the world was a simpler place. But how did he begin his songwriting journey? As a builder, his father used to bring home records from properties he had to demolish, meaning the young George was weaned on a wide array of styles. Everything from jazz to T-Rex’s Metal Guru via classical orchestras and the songs of old school crooners including Frank Sinatra and Tony Bennett all dripped down into the creative mix.

From this eclectic musical grounding, it was the New Romantic movement that really caught his imagination, leading George, his puckered lips and sculpted cheekbones to become a regular at the late Steve Strange’s legendary Blitz Club. It was here he met pop music manager Malcolm McLaren and landed a role in the svengali’s project Bow Wow Wow.

‘I was in Bow Wow Wow for almost a blink of an eye,’ he says. ‘But working with Malcolm had a big influence, as he really went out of the box in terms of what he wrote about. I carried some of that over with me to the early incarnation of Culture Club.’

Culture Club vs the world

As he says, soon after joining, he left Bow Wow Wow to form Culture Club, the name reflecting the diverse ethnic make-up of the group. Within a year they’d been picked up by Virgin Records, released debut album Kissing to be Clever and landed in the top five of the UK charts. The single Do You Really Want to Hurt Me changed everything for the band, reaching number one in several countries across the world. Did they always know they were destined for pop stardom?

‘We never thought of it like that. When you’re young, you’re much more insecure. With no experience you come into the industry unaware of how things work. You have a lot of naivety, which is wonderful and powerful. But you don’t know the realities and how things can blind side you,’ he says.

During their most triumphant years, he was constantly refreshing his musical influences, sniffing out inspiration everywhere, from Bob Dylan to Morrissey. ‘I was always trying to write the most interesting lyrics by listening to other people’s songs,’ he says. ‘When Morrissey wrote a love song, he did it from a very peculiar angle and that had a big impact. You’d be surprised who have influenced me over the years. My thing was always trying to put as much honesty and as much of myself into my writing as possible.’

This confessional soul-bearing was at the heart of Culture Club’s mounting chart success. And success it was on a massive scale. The band were the first group since The Beatles to have three top 10 hits in the US from a debut album. Second album Colour by Numbers hit the top spot in the UK and number two in the US with Karma Chameleon reaching number one in 16 countries. The album shifted 16 million copies and the single was the best-selling in the UK that year. Ever since they entered the global stage, his songwriting palette has expanded and continued to become increasingly refined.

‘When I was younger, many of the songs I was known for were like a personal diary,’ he says. ‘I used to write about what was going on in my personal life and around me. As I’ve got older, it’s broadened. I tend to have less dramatic relationships these days so I have to find other things to write about.’

Alongside Culture Club, George’s lengthy career includes countless albums both as solo artist and DJ. Having sold over 100 million singles and in excess of 50 million albums, for him it’s the less well known works that are his most treasured.

‘Taboo the musical, I do think that was my opus. It was a very proud moment. I got some incredibly write ups for the score which I wrote with John Themis and Kevan Frost.’, he explains.

The musical, featuring lyrics by George, is a fictionalised account of a group of ‘names’ set in the city’s most fashionable club. Loosely based on the Blitz, the production was a hit both on Broadway and in London. ‘Taboo was a big thing for me and I still think of it as one of the best things I’ve ever done,’ he admits.

Now he’s about to return to the music biz with a pair of albums as well as forthcoming American tour, what are his thoughts on the pop landscape? You could argue that these days, it’s a far more anodyne and safe place than when Boy George and Culture Club first emerged in a blaze of pouts and chart storming gender bending.

‘We’re in an age of formula, he says. ‘The things you hear on the radio are pretty much the same. I still write, I’m still loving it. It’s just finding new ways to get music heard, that’s the challenge.’

He continues: ‘The eighties were a product of the seventies and the seventies the sixties. We were Bowie kids, Roxy Music fans, into The Sweet and punk rock. The seventies were such an interesting time for pop culture and music. You had everything from glam to punk to electro and disco, funk, all going on at the same time.

‘When we started out, we didn’t really know what the score was or that it would last. I never thought I’d be sitting here 30 odd years later talking about my career or getting an award.’

‘Now if you do this, this and this, you’re likely to become famous and make loads of money. But then, you have the flowers that grow through the cracks - artists like Amy Winehouse and other unique special musicians - nothing would stop them.’

For him, while the online world has opened up new ways of consuming and disseminating music, it’s also taken some of the glitter away from pop culture. ‘When people went to a concert in the seventies we didn’t know what was going on or how things worked backstage. A lot of the wonderful mythology and magic no longer exists.’

Looking back it’s obvious that George has endured his fair share of bumps and bruises from the music industry, the authorities and his own personal demons. But now the future looks sunny. He’s keen to point out that he’s grateful for the chance to make music his living.

‘When you’re young you’re hell bent on making everything a drama, you forget to breathe, look around and take it all in. Anyone who gets the opportunity to be in this business should have some gratitude, hold onto their hats and try to have as much fun with it as possible. Within the realm of the law obviously,’ he laughs. ‘Remember it’s a job and it comes with a responsibility. In my case that was hard earned.’